12:8). They offered 2 pigeons meaning the family was

they were observant Jews and would be Jesus as he 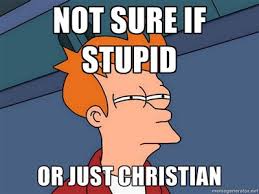 Don’t Blame Jesus for the Weird Things Christians Do

Maybe it was that I never thought through things, but I watched high school friends who identified as Christian hoping to find fault. And I found fault. Therefore I concluded Christians were fakes and flakes.

While in the military I became a Christian myself, quite unexpectedly as I think about it now. An accident of sorts maybe, but I wound up attending a Baptist church in Fairfield, California and heard the pastor tell the incredible story of Jesus. Still a puzzle to me, in a twinkling of an eye I was converted, and almost against my will.

Guys I worked with as a medic with 2nd Casualty Staging Flight at Travis AFB found out about my becoming a Christian and watched me closely, hoping to spot a flaw. Of course, they had no trouble finding out what a hypocrite I was. Guess they thought I would be perfect just like I thought my high school friends had to be perfect. I mean, they did say they were Christians.

What was my problem?

A Christian is a sinner who has been born anew by the Holy Spirit of God. He or she is still a sinner, but a forgiven sinner.

This Christian starts out a newborn, messy diapers, crying, sleeping, just out the chute. Then a rug rat, a toddler, little kid, pre-teen, teen, young adult, adult, mature adult, elder adult—each of us go through all the stages.

In my seventies now, I wonder if I have reached maturity yet. I don’t think so. To be honest I have been rather retarded in my growth. Not the fault of the Parent, but mine all together. I think I have been more rebellious than most, or maybe my hormones stronger than others, something, but my progress as a pilgrim has been really slow. This, however, does not mean I am not a Christian.

I have noticed that one mark of growing up into the fullness of Christ has been my desire not to sin. When I catch myself acting the “old man” I cringe and ask for forgiveness.

It is true, I have found, that it can be painful to grow up spiritually. If I had become aware of all my imperfections back then, I mean all at once, I would have been overwhelmed. Perhaps this is comparable to expecting a toddler to play college level baseball. Not going to happen.

Almost as payback, I have had non-Christians chastise me for my ‘little’ imperfections. Worse, I have had Christians do the same; after all I am a pastor of a church, and an author of Christian books. (I will sometimes say that a church can be like a minefield. One can be blown up.)

How we love to blame and judge! It is the national pastime. Anything bad that happens, we want to know who to blame.

How do I know this is so? I find it in myself for one thing, and I am about that business constantly. And when I find cause, I stigmatize and sometimes heavily.

A little phrase I use with the high school kids I coach in baseball is, “I am here to criticize heavily.” Of course, after the first week of the season they know I do not mean it, and we all laugh when I say it. After decades of coaching I have learned that criticism, demeaning language, and putting down others, does not produce good results either with the players or members of the congregation.

I ignorantly judged my high school friends. I looked down on Vern and Don, surgery techs at Travis AFB, after I was told they were Christians, without even thinking about what I was doing. After I became a Christian, Vern and Don became fast friends and we loved to eat together at mid-night chow at the hospital as our duty hours were from 5pm to 8am.

Judging the weirdness, or what we consider to be weirdness, of Christians is a defensive mechanism. I was unconscious of what I was doing, and I think it was because I was beginning to feel convicted of my sin. I had to find a way to assure myself that they were wrong, probably crazy, but that I was sound of heart, soul, and mind.

When I talk with others who are not Christians and who know that I am, I will often find the same attitude toward me that I had back in my high school days. At least, when I see it I know not to react or take it personally. It is a case of “there but for the grace of God go I.”

Proof we are not perfect

John the apostle, the longest lived of those who were directly called by Jesus, wrote to a Christian audience:

If we say we have no sin, we deceive ourselves, and the truth is not in us.

If we confess our sins, he is faithful and just to forgive us our sins and to cleanse us from all unrighteousness.

If we say we have not sinned, we make him a liar, and his word is not in us.

This passage is 1 John 1:8-10. Quite clear: being a Christian does not mean we do not sin. Perhaps John saw there was a danger Christians might think they had to be perfect, and if so, such thinking would not be healthy. John uses sharp language to make sure we know we are not perfect.

The Christian then confess sin and the promise is that forgiveness follows.

Here we encounter one of the Bible’s paradoxes, which refer to two truths that run parallel with each other, like railroad tracts, but never intersect. Though all our sin is forgiven since all of it, past, present, and future, has been placed on Jesus as He died on the cross. He shed His blood for us, and His blood washes away our sin. Yet, we are to continue to confess our daily sin, the sin that has already been cleansed from us, in order that we do not have it on our conscience. This is one of the most profound of all the paradoxes in Scripture. (Why, after all, would we imagine that God and His ways are easily grasped by the sinner.)

Then John goes on:

My little children, I am writing these things to you so that you may not sin. But if anyone does sin, we have an advocate with the Father, Jesus Christ the righteous.

This passage is 1 John 2:1, the verse immediately following the earlier verses.

John does not want his readers, those under his pastoral care, to sin, but if they do, and the Greek clause, a third class conditional structure, indicates they will in fact sin, their confession of sin will be heard and they will be forgiven. (This is one of the many reasons biblical Christianity is healthy.)

So then, when sin is discovered, Christians need not hide their sin nor be in fear. We have Jesus who is our righteousness.

The Apostle Paul spoke of our having the “Light of the Gospel” in us. Yet this “treasure” is in jars of clay. This wonderful truth is found in 2 Corinthians 4:7:

But we have this treasure in jars of clay, to show that the surpassing power belongs to God and not to us.

Clay, vessels of all sorts are made out of clay. The containers hold something and in this case it is the Holy Spirit. We speak of “Christ in you, the hope of glory.” (Colossians 1:27)

Sinless perfection is not to be found on the planet. Not only do we deal with our own temptations but also there is an enemy who attempts to undo us like he did Adam and Eve in the garden. And what may be the result: Christians doing weird things. And I have to be the first to raise my hand.

Again, what did John say, “If we say we have no sin, we deceive ourselves, and the truth is not in us.” This is how it is with us. Yes, we are straining to grow up into the fullness of Christ, but it is not yet. I will still do weird and strange things.

I am to blame. Blame me, not Jesus.

The danger in blaming me is that you will also reject not only my Christianity but my Jesus as well. And this is the real reason for this essay since the price you will pay is beyond imagination. If you had any inkling of this reality, you would be horrified.

“What a conclusion!” must be running through your mind right now. It would be wrong of me, a sin if you will, if I did not present full disclosure.